How can we help you today?

What is ORP (Oxidation-Reduction Potential)? Print

Oxidation-reduction potential (ORP) or redox is a measurement that indicates how oxidizing or reducing a liquid is. For example, water may be moderately oxidizing (such as aerated water), strongly oxidizing (such as chlorinated water or hydrogen peroxide solution), or reducing (such as an environment where anaerobic microbes are active). In short, ORP is a measure of the cleanliness of the water and its ability to break down contaminants. This measurement has a variety of applications, such as checking for safe sanitation of drinking water or monitoring fluid for the suitability for anaerobic microbial processes.

What are oxidation and reduction?

As an example, let’s look at the reaction of oxygen gas with hydrogen gas to form water:

If we look closer at the water molecule,  writing it as (H+)2(O-2), it can be viewed as a combination of two ions, O-2 and H+, that have electrical charges because they gained or lost electrons:

Electrons have a negative charge, so the oxygen atom in the water molecule gained two electrons to end up with a −2 charge:

In the above reaction, the oxygen atom was reduced because it gained electrons.

Each of the two hydrogen atoms in the water molecule lost an electron to end up with a +1 charge:

In this reaction, the hydrogen atoms were oxidized because they each lost an electron.

Some common oxidation processes include decomposition of organic matter and conversion of iron to rust (iron oxide).

Electrons and the ORP scale

From the above discussion, one might guess where the word “oxidize” comes from. Oxygen gas is very good at accepting electrons from other atoms, and this is indeed the most common type of oxidation process that occurs in the environment. From this, we might also suppose that an environment that contains oxygen gas is an oxidizing environment. In such an environment, iron will turn to rust, and aerobic respiration can occur.

One might also guess that a reducing environment is an environment without oxygen gas. Such an environment often includes dissolved gases that are products of anaerobic activity, such as methane, hydrogen sulfide, and hydrogen.

The degree to which a fluid is oxidizing or reducing (represented by ORP) depends on the presence and strength of various oxidizing and reducing agents. ORP can also be thought of as representing the availability of electrons. Because reducing agents give up electrons, a reducing environment is one where electrons are relatively available. In contrast, an oxidizing environment is one where electrons are relatively unavailable.

ORP is expressed as an electrical potential (a voltage). Generally speaking, a reducing environment is indicated by a negative reading, and an oxidizing environment is indicated by a positive reading. The most common unit for expressing ORP is the millivolt (mV), and most meters can read values ranging from -1000 mV to +1000 mV. The more extreme the negative or positive value, the more reducing or oxidizing the fluid is. 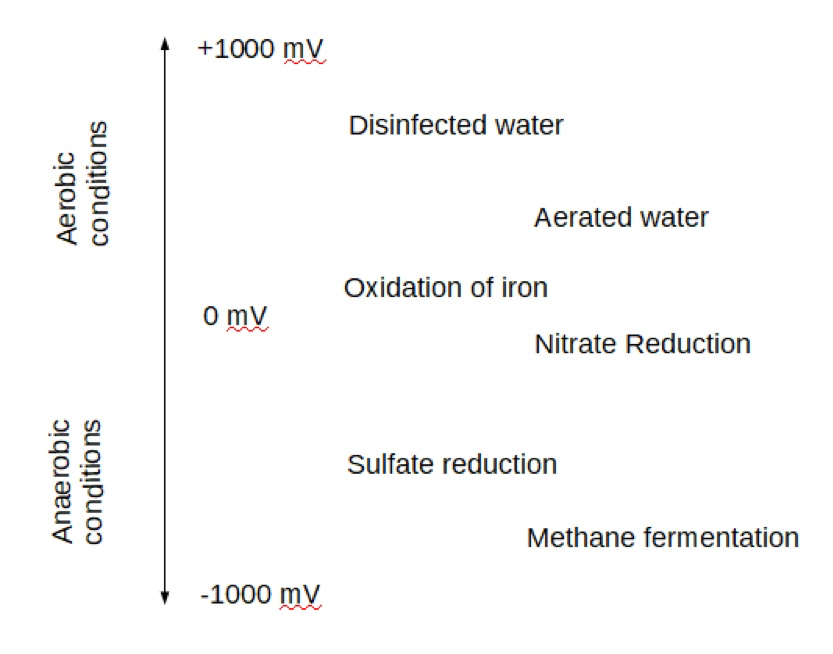 In wastewater treatment, ORP is used to determine the types of microbial processes that are occurring and to help operators manage the treatment system by promoting or preventing certain reactions. For example, ORP may be controlled in various parts of a system to digest organic matter, remove nitrate or phosphorus, and control odors.

Because low values of ORP indicate anaerobic conditions, ORP can be used to detect anaerobic microbial activity in the environment, such as in the water column or in sediment. ORP can also be used to indicate soil saturation, which makes it useful for mapping wetlands[1].

In other environmental applications, ORP measurements can be viewed as an extension of the dissolved oxygen (DO) scale[1]. DO meters can cover the range of aerobic conditions, but they cannot indicate how reducing an anaerobic environment is. The ORP scale, on the other hand, covers a wide range of reducing conditions. Because of this, ORP can provide insight into the chemistry of anaerobic environments, such as the types of microbial processes in sediments or reactions involving pollutants in contaminated aquifers.

ORP is a fast and inexpensive measurement of the oxidizing and reducing conditions in an environment or system. This makes ORP measurement suitable for a wide range of industrial and environmental applications where oxidizing and reducing conditions vary. ORP is especially useful for routine or continuous monitoring situations where slower and more expensive chemical tests would not be as practical.

Did you find it helpful? Yes No

Send feedback
Sorry we couldn't be helpful. Help us improve this article with your feedback.